Hello there. My name is Henry Mills, and over the past three days I’ve begun learning and using different social platforms and trying to understand continuity between them all. Before we jump into that, I’d like to introduce myself. You can read a bit about me on my about page here, and/or check out some of these:

Hello World (but not really):

A Tour of my Lab:

Me Playing the Recorder Because I can’t Afford a Saxophone

Me Trying to fit in a Bushnell Shower 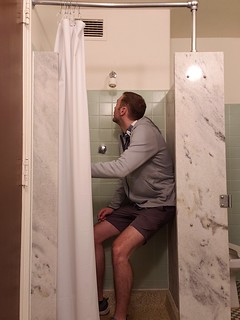 Now for some words. Through this assignment I got to setup the sub-domain you are currently visiting. I already had a domain through the DKC (or whatever they are now), but I had never done anything with it – you can look, it’s gross – so this was my first real endeavor with WordPress and I’ve gotta say I found it really fun. It was definitely frustrating because I would spend a ton of time figuring out some minute capability, only to realize there’s a button for it or something else heartbreaking; for example, I wanted this summary to have collapsible text so I spent like, 2 hours (probably only 40 minutes), shopping for a plugin and learning how to shortcode, only to learn I couldn’t have embeds in the collapse, so I scrapped it for aesthetics, though I now I know wtf a shortcode is so its all good. I do have to confess that it took me like, 2 hours (probably only 1 hour), to figure out how to do Gravatar, the problem? Incorrectly spelled my email address. As far as the social media setup, that was interesting.

Social media is not my natural habitat, so while not technically difficult, there were some emotional hurdles I had to get over. I especially enjoyed how the top “suggested follows” were all my ex-girlfriends. A more concrete difficulty was understanding how tags and categories work. I asked you (or Dr. Polack if you’re not her) for some clarification, which you gave, and I blogged about here, and tweeted the aforementioned blog here.

Overall, I am content with the way I handled this assignment. I worked hard on it and really tried to make the most of it and I think my work shows. I didn’t necessarily do the easiest things (see this Daily Create blog) possible, I tried stuff that wasn’t mandated by the assignment, and really took the time to explore the platforms. I really enjoyed the Daily Creates, but I think my favorite part isn’t anything about content creation or being social, but trying to figure out new and cool functionalities of the blog itself, even playing around in code editor. In the words of Richard Feynman (or maybe his publisher):

The Pleasure of Finding Things Out

One thing that did give me trouble, and I’m not sure how I’m going to fix it, is losing track of everything. I can’t remember what I’ve posted where and if I’ve linked to it and what jokes I’ve made and which I have only thought of making (I don’t like double-dipping jokes). While it is an issue, I think it also indicates that I’m putting out a lot of content and interacting with others frequently. All these are linked below, but I have written 7 blog posts of varying seriousness along with responses on two classmates’ blogs, posted on Twitter 9 times (6 original content, 3 responses), uploaded two YouTube videos, 3 Flickr photos**, and a SoundCloud song of me playing the recorder, which I only ever do for the lols so I’m terrified someone’s going to think I take it seriously. I have also responded to two responders on my work.

**: I uploaded a TON of flickr photos to support a blog post here, but in this summary I’m only linking to ones more directly related to assignments.

Regarding social implications of my work, I sincerely hope there are none. In general I take my education and my work very seriously, but I don’t take myself (or literally anything I say) seriously at all. One of my biggest concerns about this course, is that someone is going to take something I say or do too seriously. I realize this question is going to come up for every assignment, and I’ll give more specific answers then, but for this first one I wanted to identify my overarching concerns.

Link Dump (some are already in this post, but redundancy is fun):

One thought on “Summary – Assignment 1”