The Hand of Justice

Not sure how libel works so I will just say, this is clearly all made up.

Along with the bell tower and mold, the fountain is one of the iconic landmarks at the University of Mary Washington. Flanked on both sides by freshmen dorms, it serves as a welcome and a gateway into the world of collegiate life not only academically, but socially. At the end of their time here, the once freshmen will enter the fountain to celebrate the fruits of their hard work, as they soar like the eagles they are. In the hotter months students will sit around the fountain enjoying its cooling splashes, and when it is drained in the winter months, it serves as a chilling reminder just how empty we all are inside.

Then one day, the Presidential Ad Hoc Subcommittee Task Force on Fountain Auditing heard an anonymous rumor that the fountain’s namesake was not A.S.P.I.R.E. He was indeed, UNaspiring. The fountain had to go. Replaced by a shining new symbol called the H.A.N.D. O.F. J.U.S.T.I.C.E., an acronym far too unwieldy to ever be expanded ever. More commonly referred to as the HoJ (pronounced hodge), this acronym beats down injustice and intolerance (except intolerance for injustice and disagreement obviously) with impunity and moral rectitude, and points the way to a better tomorrow.

Five years later, someone realized it was insensitive as not everyone has hands, and all it does is serve as a callous reminder of this. It was torn down amidst the protests of a bunch of people that protested the last fountain being torn down and think any form of change is a conspiracy propagated by the devil. 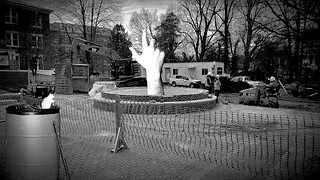 And in the spirit of revolution, here I am playing the good part from Seize the Day on the recorder.

As far as the thought that went into it, I had originally planned on having my hand come out of the fountain holding something that would be edited in later. I talk about this a little more here, but I took a bunch of random pictures and when I looked through those, I decided I really like the white squirrel. So, I used the trash can squirrel and my hand, and then took the picture of the fountain specifically. The fact that they’re doing construction on it is really what inspired the story.

I’ve been trying new ways of photo editing, and this time I used this tutorial for Gimp. The result was great, but took forever and was probably overkill.

2 thoughts on “The Hand of Justice”