When we first got Assignment 2, which is all about visual storytelling (and of course, intertwining visual stories with other media) the first thing I did was read the instructions, because I can be a good student. Then, I decided to go out and start taking pictures of stuff. I didn’t have specific visual assignments in mind, but I just wanted to go play with it.

Of my favorites are this one, where it looks like the grass is a rain cloud and there’s a raindrop eroded from the pavement (from the DS106 tip “Pay Attention to the Moment.”) 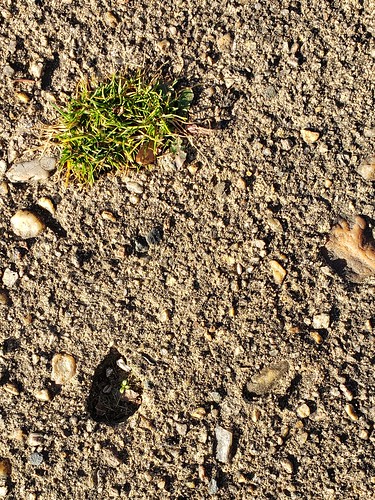 And this one, where it just seems so out of place for a fire hydrant to be there. I guess they’re preparing for the next gender reveal party amirite? (From the DS106 tip “Better Contrast Makes Better Stories.”)

The entire collection is here. There are a series of photos titled “BP Shot.” I put the phone in my back pocket and just rapid fire took pictures as I walked, seeing the world from the perspective of my butt. I swear, I’m an adult.

As far as tips used, I got all of mine from the DS106 Handbook. I looked at the two other sources but they were more about the philosophy of visuals than “don’t take a picture with the sun in the lens.” I’ll discuss this more in its own blog post. Regardless, the tips I deliberately used were “Better Contrast Makes Better Stories,” “Change my Perspective by Changing Yours,” “Get Balanced,” and “Pay Attention to the Moment.” In addition to following these tips, I deliberately took shots that go against these tips – best way to learn is to do it wrong, right?